Relationship adviser and blogger, Joro Olumofin has shared an interesting story which is cracking people up on social media.

Recall that a man complained that his wife vag now stinks after years of using the 69 position.

The story has attracted some sort of outrage from ladies who feel his ideas are archaic.

Read the full story below:

“I went to a friend house this evening. That’s how his girlfriend made dinner and knelt down to serve him. She knelt down 3 times while bringing the cutlery. The guy is my mate 31 years. The girl is 27 years o.

They are not married. Such respect and love. My own girlfriend is just regular. She will tell me to even fry my egg myself. How can I get her to kneel down and serve me food. Because I’m just thinking of it. After 3 years of relationship she should be able to kneel down for me.” 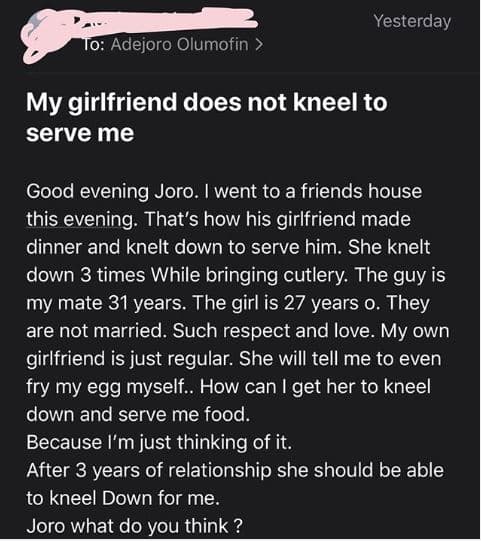